Mysteries in the Music: Case Closed 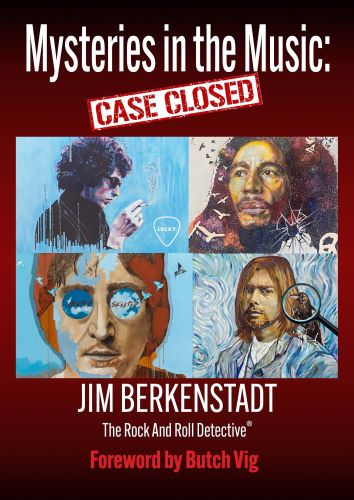 Mysteries in the Music: Case Closed examines the secrets, myths, legends, hoaxes, conspiracies, and the wildly inexplicable events that are such an intriguing part of rock and roll history. Jim Berkenstadt, aka The Rock And Roll Detective®, has spent decades researching the players behind these famous soundtracks and the mysteries hidden within the music itself.

Travel back to the 1950s to uncover “Who Really Discovered Elvis Presley?” Revisit a time in the 1960s when a famous folk troubadour tried to form a supergroup with members of The Beatles and The Rolling Stones. Learn the origin behind big name artists using pseudonyms to mask their true identities. Go behind the scenes of CIA intrigue in Jamaica 1976 to discover whether the spy agency tried to influence an election and arrange for the assassination of reggae superstar Bob Marley. Discover whether The Beach Boys actually stole a song and the copyright from psychotic cult leader Charles Manson, and kept all of the royalties. Finally, uncover the secrets in the making of Nirvana’s Nevermind album, considered by many to be the most influential rock album of the 1990s.

These mysteries have intrigued rock and roll fans for so long because no one has ever asked eyewitnesses the tough questions or dug through the primary sources and documentary evidence left behind… until now. After many decades, the back stories of pop and rock music lore are finally unearthed—and the truth is revealed in Mysteries in Music: Case Closed.

Rock and Roll was built on its own crazy mythology, but Jim knows the true stories are likely to be even wilder than the myths. I read this book with great pleasure and fascination and I have no doubt that you will too!”